Finding healthy snacks for my little monkeys has always been hard.  Offer them fruit and they go and hide.  Offer them veg and they run to the hills.  Snacks usually consist of yogurts, crisps if they are extremely good (or I need to bribe) and home cooked biscuits and cakes.  With home cooking I at least know there are no additives and other things lurking.

Both Children take packed lunches to school and both want crisps each day.    The crisp and snack industry is worth £2 Billion a year in the UK alone.  The Food Standards Agency say that 69% of children's lunchboxes contain crisps.

However, research by the British Heart Foundation has found that this crisp habit could be causing problems in the future.  A packet of crisps every day is the equivalent of drinking nearly 5 litres of oil.  Yes, you read that right, 5 litres of oil.  To me this is shocking and then there is the hidden salt and sugar in our foods.

I also know that my children don't eat enough whole grains either.  They are not big on brown bread, rice or pasta. The 'white' products contain refined grains which don't have the same health benefits as food containing wholegrain.  I try to sneak the fibre in chocolate and carrot cake by using wholemeal flour but still they really don't have enough. I know my children are not alone but it is estimated that 27% of children have no wholegrains in their diets at all.

To help hearts be healthy the BHF recommends a diet that includes:


Walkers Hoops and Crosses are made from 56% wholegrain and instead of being fried they are oven cooked meaning less fat.

Last week Walkers sent us a packet of these new crisps to try along with a cute little monkey and a booklet all about their new snack.

After Little Nephews Christening this weekend we put them to the test.

Starting with the oldest taster:

'They're alright'
Then comes back for seconds, thirds and even tried for a fourth taste!

'Grunt'
As a child little Bro was said to grunt once for yes and twice for no.  Since moving to Wales to go to Uni and never leaving he can now grunt in Welsh!

'Yummy, can I have the rest of the packet?  Pleeaaase?'

'MMMMMM, Can I have some more please?'

'{Insert high pitched squeal}'
Only 1 last week, so doesn't talk.  Look on the face and hand held out suggested they are a winner. 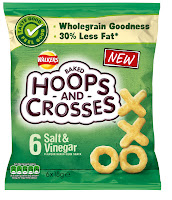 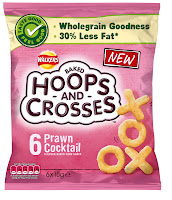 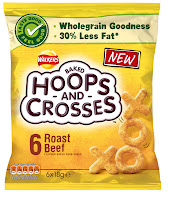 Overall, they were a success and now we have tasted them I was tasked to find some in our local supermarket.  We live in the middle of nowhere and only have a co-op so was quite surprised to see they were already stocking all 3 flavours.  A pack of 6 was priced at £1.89. Only The Boy likes Prawn Cocktail and he loved these.  I am a little boring when it comes to crisp flavours and only ever eat salt & vinegar, ready salted or cracked black pepper.  Personally I found the salt & vinegar hoops and crosses to be too strong a flavour.  The girl thought they were ok but the boy devoured the remaining ones left in the packet.  These crisps are certainly going to find their way in to lunch boxes in our house.


And after much arguing the winner of the monkey?

The little monkey in the middle

As part of this review we received one packet of Walkers Beef flavoured Hoops and Crosses, a super cute toy monkey and payment for writing this post.  All views are mine(**) and those of The Boy (11 on Wednesday), The Girl (9), Little Nephew (1 last week), Little Bro (37) and Grumpy Grandad (old).
Posted by Candace at 5:43 PM

What a great review :)
How do I become a reviewer???

Apart from my meusli, we don't have wholegrains at all here. We just don't like brown versions. We'll have to try those. I'm curious about the oil in the crisps though - is that over a year or what?

Or below to buy from my Stampin' Up Store

Candace
Single working 40 year old with a slight obsession with crafting, cupcakes and shoes. Spend my time running round after a mini zoo of 10 & 11 year old kids, cats, rabbits and chickens. This is our story after I decided to run away to live at the seaside. In my 'spare' time away from Motherly duties I run a Toy Shop and I am an Independent Stampin Up Demonstrator

Things I Love To Do

Below you find one of my passions in life; Crafting, or more specifically Scrapbooking and Crochet.

This year's goal is to complete Project Life and make 365 LO's.
At the bottom of the page is my tally of LO's made.

I plan on making one stripe, row or square for each day this year. Some days I may make more and others none at all; just 365 in total. At the bottom of the page is my tally.
If the ticker is showing the wrong month I'm either ahead or behind with my goal.; hopefully ahead!
This year I am crocheting: